LOOKING FOR LOVE IN ALL THE WRONG PLACES 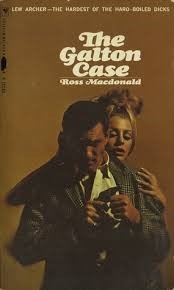 Mrs. Galton is what we expect—imperious, manipulative, self-centered and willful.  And those are only her good qualities.  She browbeats everyone in sight and makes disparaging references to those who aren’t.  With a maternal sense that seems out of kilter with everything else we learn about her, she claims she is certain that Anthony is somehow still alive; that if he was dead she would know it. Despite her conviction that he is alive, she is still filled with vitriol at both her son and the “cheap, gold-digging tramp” who “morally destroyed him.”

Macdonald’s choice to portray her in an unsympathetic light may seem surprising at first.  She is frail and ill and in search of her only child; and she is his client.  A lesser writer would play on our sympathies.  But Macdonald has his own agenda.

The interview is long on atmosphere but short on details.  Mrs. Galton is a barely cooperative witness. But Archer gets some details.

Even Archer Needs More to go on Than This

Archer confers with the lawyer, Sable, who admits that the case is unpromising but encourages him to continue.  Their conversation is interrupted by news that Sable’s wife has telephoned and is upset.  Sable rushes off, leaving Archer with Mrs. Galton’s assistant, Cassie Hildreth, who we met on the badminton court.

The Passed Over Woman is usually a great source of information, and Cassie does not disappoint.