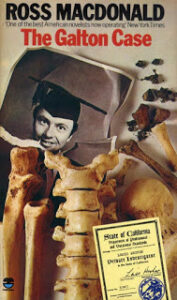 The first five chapters have moved along briskly, and in a relatively few pages Macdonald has laid out the mystery.  But it’s been relatively static.  The plot has been advanced by a series of conversations, all about events in the past.

That’s about to change.

Sable, the lawyer, had gone home in response to an urgent call from his wife.   Archer has a brief conversation with Sheila Howell, the teenaged daughter of Doctor Howell.  She was Cassie’s badminton partner when Archer and Sable first arrived.  Sheila is more than just the daughter of the Galton’s family doctor—she is Mrs. Galton’s goddaughter and she calls her Aunt Maria.  The closeness of the Howell family to Mrs. Galton will become important in due course; for now, just take note.

Archer locates a telephone book and calls the Sable residence.  Archer is calling only to confirm his fee arrangement, but with that call, the chaos begins.  Both Sable and his wife are on the phone, both upset, and she is screaming for someone to call the police. Sable manages to tell Archer that there has been an accident and that his houseman Culligan has been stabbed to death.

Archer to the Rescue (Well, Not so Much)

Archer speeds towards the Sable residence but gets lost in the maze of development streets, never having approached the house from this direction.  (This delay will eventually have significance.)

Not long after he gets a distant view of the roof of the Sable house he sees a car burning in a roadside ditch.  Archer sees a man walking away from the wreck, towards him.  Evidently forgetting the trouble that being a Good Samaritan caused him in Find A Victim, he offers the man a lift.  The man displays a gun, forces Archer out of the car, and drives away in Archer’s car.  And you thought it was only New Yorkers who were rude and ungrateful.

Can His Day Get Any Worse?

With nowhere else to go, Archer stands by the burning car and asks the firemen on scene to report that his car has been stolen.  Two deputies promptly arrive, decide that Archer is the one who stole the burning car, and arrest him.  This triggers Archer’s urge to needle the police, which is never far below the surface.  Before the needling ends in the usual pistol whipping, seen most recently in The Doomsters, the smarter of the two deputies begins to realize they are being played.  The episode is over as soon as the deputies deliver their prize to Sable’s house, where the County Sheriff himself is waiting, and Sable identifies Archer.

Time to Get to Work

The Inevitable Search of the Dead Man’s Effects

Archer’s search always follow the same pattern; the room is bare and sparsely furnished, but the real clues will be in a battered suitcase under the bed.  This tradition is no accident.  As a boy, Macdonald had vivid memories of his father’s suitcase and its smell of the sea, tobacco, and masculine odors.  I am only halfway through his novels and I have lost count of the number of searches just like this one.

“Mrs. Ronald S. Matheson.”  It was postmarked San Mateo—a return address would have been nice, but implausible, given the nature of the message.  Archer has plenty to go on.

Archer is on the next plane to San Mateo.