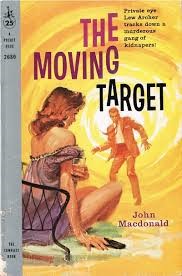 THE END OF THE BEGINNING

Two out of three ain’t bad

We have reached the point where two of the three crimes will be revealed; the last and most important one will wait till the very end.

Although Felix is a very minor character, he has an important role.  First, he serves to remind us that the disadvantaged people of the book, the Sampson household staff as well as the Mexican field workers on Sampson’s ranch, are human beings with dignity and deserving of respect.  Second, he provides Archer with information Archer could not obtain plausibly in any other way.

Once Felix tells Archer what he knows, things happen fast.

A brief detour to Sillyville

Archer informs Miranda that although her father is probably still alive, Taggert is dead.  This results in the following plot developments:

A return to reality

The Sheriff shows up.  Archer and the police have what seems to be another melodramatic exchange of threats; but like the one at The Corner, this one has a purpose, too.  With the threat of arrest hanging over his head, Archer has a plausible motivation to explain to the Sheriff that Sampson and Troy were engaged in bringing in illegal immigrants through the Temple in the Clouds to serve as strikebreakers on Sampson’s ranch.  Now the Sheriff can make some arrests. (BTW, this is the source of the crumpled bills and the arithmetical notes that Archer found in Fay Estabrook’s drawer.  The immigrants pay to be smuggled in.)

What this case needs is more eavesdropping

Archer visits Marcie, Eddie’s girlfriend.  She tells him nothing and thinks that Archer killed Eddie, but she turns out to be useful anyway, without knowing it.  After Archer leaves she takes off in her car and Archer follows her  to a remote cabin occupied by Marcie, Troy, Betty Fraley, Faye Estabrook, and Luis, a thug who is Puddler’s replacement.  While Archer eavesdrops, hey torture Betty Fraley by burning the soles of her feet until she confesses that the money is in a bus locker.

Archer rescues Fraley.  Predictably in a Ross Macdonald novel, she tries to sexually ingratiate herself with him and just as predictably he refuses.

Archer telephones the police to arrest Troy and the others.

Fraley tells him where Sampson is being held and Archer calls Graves, telling him to get the Sheriff and medical attention to the site as quickly as possible.

The “Who’s on first?”  explanation of events so far