The Barbarous Coast — Part One 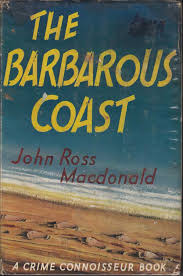 What The Critics Say

\“Rich in character, setting and style, Coast is a strong book, But its strength lacks coordination.  Ross Macdonald’s marvelous material suffers from vagueness and lack of dramatic follow-through. Notably weak is dramatic selection.  We don’t move close enough to the characters to imagine ourselves capable of their crimes. Instead of finding pieces of ourselves in the book, we examine the motives of strangers . . . Coast is a driving good novel.  Had Ross Macdonald sharpened its motivation, he could have supplied the conviction to make it a memorable one.”

Peter Wolfe, in Dreamers Who Live Their Dreams, identifies this as the first of Macdonald’s “middle novels,” written between 1956 and 1960.  Although I entirely agree with his comments about “sharpening motivation”, discussing this now would be a serious spoiler.

“The Barbarous Coast is not a pleasant novel . . . Macdonald sails an irregular course, maneuvering between massive influences in Chandler and Hammett . . . The Barbarous Coast is still far from solving the structural problem with the detective novel, for it concludes in a shower of murders.”

Michael Kreyling, in The Novels of Ross Macdonald, discusses the weak plotting of the book at length.  He parts company with Wolfe on considering the four 1956-1960 novels (The Doomsters, The Galton Case, The Wycherly Woman, and The Zebra-Striped Hearse) as a unified middle period.  His view, with which I agree, is that the 1956 disasters in his personal life involving his daughter, Linda, fundamentally changed the nature of his writing and ultimately led to his artistic (although not commercial) breakthrough book, The Galton Case.  The “middle period” books were whatever Macdonald could throw together to pay his daughter’s legal and psychiatric bills.  In themselves, they are not a coherent progression of his artistic development. But we will have a lot more to say about that when Linda Millar’s life goes off the rails—literally.

“The Barbarous Coast is Macdonald’s Hollywood novel . . . it demonstrates the limits of the American detective novel after Chandler.”

Bernard Schopen, in Ross Macdonald, does not discuss the book at length, but he offers a crucial corrective, one not noted by the other commentators. It’s a long quote but for serious readers of Macdonald, it’s worth it.

“The Barbarous Coast contains an observation by Lew Archer that is adduced in every extended discussion of Macdonald’s fiction: ‘The problem was to love people, try to serve them, without wanting anything from them. I was a long way from solving that one.’ . . . It is not so Christ-like musing . . . It comes after Archer flees a woman to whom he is so sexually attracted that ‘I caught myself doubting my premises, doubting that she could be any kind of a hustler.  Besides, there was just enough truth in her accusation, enough cruelty in my will to justice, enough desire in my pity, to make the room uncomfortable for me.’ Hardly altruistic, Archer’s remarks rather express his inability to separate his personal and professional lives. He would love, but finally his will to love is not as strong as the ‘cruelty of my will to justice.’ Thus the absence of a real personal life.  Thus the emotional; intensity of his professional life.”  (Italics are mine)

“Arguably his best novel to date.”

Matthew Broccoli, in Ross Macdonald, does not elaborate this bald statement.  Readers are free to make up their own minds. For myself, I thought The Ivory Grin and The Moving Target were superior and that The Way Some People Die was a work of greater subtlety and control.

Seeing that the author had followed his advice in inserting plenty of violence and “detective in jeopardy” situations, Alfred Knopf did not change a single word. But after a decade of encouraging Macdonald to write detective novels, Knopf now wanted him to write a mainstream novel—advice that Macdonald wisely ignored.

For years, Kenneth Millar had published under variations of his preferred pseudonym, such as John Ross Macdonald, J.R. Macdonald, etc., in an unsuccessful effort to placate John D. MacDonald.  With this book, he gave up and began simply using the name we now know him by—Ross Macdonald.  John D. MacDonald’s threats of litigation were ignored.

I have read the book four or five times and have only slowly come to dislike it less.  The attack on the character who is an obvious stand-in for Raymond Chandler is crude, unnecessary to the plot, and beneath Macdonald’s dignity.  I like elegant stories told with economy; this is a sprawling shaggy dog story.  As Wolfe pointed out, Macdonald’s talent for creating vivid minor characters often deserts him here.  But, although I am not shy about injecting my own opinions, I will do my best to present the book fairly. If you got through my discussion of The Three Roads, a book that truly drove me crazy, you can handle this.