The Doomsters Part One 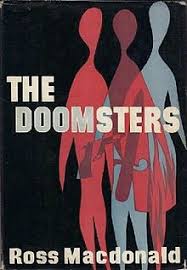 WHAT THE COMMENATORS HAVE TO SAY

To use one of the boxing metaphors of which Macdonald was so fond, Linda Millar gave her parents a one-two punch.  The first half of the combination was her fatal hit and run drunk driving episode of February 1956; her parents were still reeling from that when she staged her eleven-day disappearance in 1959 that resulted in a nationwide manhunt.  The Doomsters and The Galton Case were written between those two events. And to complicate matters, despite good reviews, sales of The Barbarous Coast had been highly disappointing.

Being a full-time professional writer is the ambition of many of us part-timers; but it has its drawbacks.  Most important, if you don’t publish a book every year, you don’t eat.  Linda’s legal and medical bills from the first incident had drained the Millars financially.  He needed to get out a book, despite everything, and get it done quickly.

The solution was at hand; an unpublished short story, “The Angry Man,” which he had written in 1955.  Turning a short story into a full-length novel is not easy, but it’s easier than starting from scratch.  But, as at least one commentator observed, the pace is uneven—sometimes it rushes like an express train and sometimes it seems to stop.  Short stories have a highly compressed narrative, and Macdonald did not have the time to expand the story to produce an even pace.

SECOND, WHERE THE HECK DOES THE TITLE COME FROM?

A Thomas Hardy poem, “To an Unborn Pauper Child,” invented the term as a personification of fate; particularly bad fortune.  To varying degrees several members of the family which forms the subject of the book believe that the family is cursed. I’m not sure they were wrong.

This was the favorite question of a dear friend, now long departed, and any discussion of The Doomsters begs that question.  For readers who know The Galton Case is coming, reading The Doomsters is frustrating; you know that he is on the verge of his first masterpiece, and pretty much all the pieces are there, but he hasn’t achieved full control of his material yet.  It’s not a bad book by any means—but it’s close enough to his mature work that you can see Macdonald’s true potential as one of the greatest private eye writers of all time, and you can see him falling short.  As Peter Wolfe observed, “Without have first tested his new rhetorical skills, Ross Macdonald couldn’t have written The Galton Case.”  And, speaking for myself, I would add that his mature work also owes a debt to The Three Roads.

“The Doomsters is a split attempt to cover both debts; to mobilize an enormous mass of Freudian material . . . and to fulfill his formal obligations to the detective novel.  The Doomsters leaves a balance due on both accounts.”

Michael Kreyling is critical of the book; not because it is bad but because it could have been so much better. “If The Doomsters is a loosely constructed novel with a heavy Freudian accent, in The Galton Case, Macdonald almost ruthlessly merges the Freudian drama of lost and found identity with his own life story and the narrative form of the detective novel.” Calling it “an interesting but flawed novel,” he compares it unfavorably with The Galton Case, where the author successfully merges “the competing claims of novelistic structure and psychoanalytic theory . . .. the characters seem to recite lines from a [Freudian] textbook.”

Kreyling joins with nearly everyone else in criticizing the final chapters. “The case unwinds after the gunplay stops in a flat, nondramatic style that stretches out and eventually diminishes the impact of the novel . . . [and] does little to clear the novel of the chatter of textbooks.”

“The Doomsters (1958) breaks more artistic ground than is predecessor, both in technique and subject-matter.”

Peter Wolfe, in Dreamers Who Live Their Dreams, finds more to admire than Kreyling.  He does note the book’s odd sense of pace, with plenty of action up to the final chapters, at which time the book comprises “the longest murder confession in Ross Macdonald.” Unlike Kreyling, Wolfe praises Macdonald for taking the time to carefully unravel the motivations of the killer.  The final chapters contain no action but they do provide what was missing from The Way Some People Die—an explanation of the murderer’s actions.

Those of you who also read the short story, “The Angry Man,” on which the novel was based will note that the story simply ends with a death and no confession.  If something seems odd about the last few chapters, it is because Macdonald grafted them bodily on to the shorter work.

Wolfe has plenty of other criticisms as well. In this book, Macdonald departs from his traditional presentation of Archer as the observer, “so thin that he would disappear if he turned sideways,” and gives him some complicated, selfish, motives of his own. Wolfe notes not only the inconsistency with the rest of the series but point out that by allowing Archer a personal agenda complicates and weakens the concluding chapters.  Macdonald himself later said it was a mistake he would not repeat.